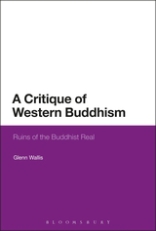 A Critique of Western Buddhism: Ruins of the Buddhist Real﻿

What are we to make of Western Buddhism? Glenn Wallis argues that in aligning their tradition with the contemporary self-help industry, Western Buddhists evade the consequences of Buddhist thought. This book shows that with concepts such as vanishing, nihility, extinction, contingency, and no-self, Buddhism, like all potent systems of thought, articulates a notion of the “real.” Raw, unflinching acceptance of this real is held by Buddhism to be at the very core of human “awakening.” Yet these preeminent human truths are universally shored up against in contemporary Buddhist practice, which contravenes the very heart of Buddhism. The author's critique of Western Buddhism is threefold. It is immanent, in emerging out of Buddhist thought but taking it beyond what it itself publicly concedes; negative, in employing the “democratizing” deconstructive methods of François Laruelle's non-philosophy; and re-descriptive, in applying Laruelle's concept of philofiction. Through applying resources of Continental philosophy to Western Buddhism, A Critique of Western Buddhism suggests a possible practice for our time, an "anthropotechnic", or religion transposed from its seductive, but misguiding, idealist haven.

Introduction: Raise the Curtain on the Theater of Western Buddhism!

1. The Snares of Wisdom

Neoliberal Subjects are Us, Wise and Well

2. Specters of the Real

The Principle of Sufficient Buddhism

3. First Names of the Buddhist Real

A Science of Buddhism

The Great Feast of Knowledge

Interlude: The Immanence of an Actual Suffering

The Deliverance of Fiction

A Buddhism without a Past

It is a very rare and precious thing to find a book such as this, which engages as deeply with religious materials as it does with the philosophical. Glenn Wallis brings together resources from Continental philosophy, namely Francois Laruelle's non-philosophy, and concepts and ideas from Buddhism to carry out a A fecund project that grows in the ruins of our philosophical and religious pretensions and arrogance." —Anthony Paul Smith, Associate Professor of Philosophical Theology, La Salle University, USA

Glenn Wallis' Critique of Western Budism is one of the rare examples of non-philosophy applied on a specific subject area, next to Anthony Paul Smith's non-philosophical environmental studies, John O'Maoilearca's animal studies as well non-Marxism. It proves that non-philosophy is praxis grounded rather than being self-sufficient system of philosophical diagnostics. Wallis' brilliant analysis demonstrates that radicalized Buddhism establishes a perfect homology with non-philosophy, both in form and in substance. —Katerina Kolozova, Professor of Philosophy and Gender Studies, University American College, Macedonia

Wallis' Critique is a bold commentary and analysis of Western Buddhism that runs against the mainstream. His central arguments are convincing and should certainly enter into discussions of "mindfulness" practices and adaptions of Buddhism in Western societies. This book will challenge the thinking and practice of many readers, make some uncomfortable, but will be a life preserver for others. —Stuart W Smithers, Chair of the Department of Religious Studies, University of Puget Sound, USA