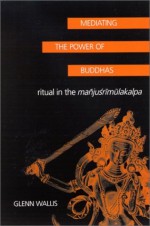 Mediating the Power of Buddhas: Ritual in the Mañjuśrīmūlakalpa﻿

Mediating the Power of Buddhas offers a fascinating analysis of the seventh-century ritual manual, the Mañjuśrīmūlakalpa. This medieval text is intended to reveal the path into a ritual universe where the power of a buddha abides.

Author Glenn Wallis traces the strategies of the Mañjuśrīmūlakalpa to enable its committed reader to perfect the promised ritual, uncovering what conditions must be met for ritual practice to succeed and what personal characteristics practitioners must possess in order to realize the ritual intentions of the Buddhist community. The manual itself was written at a key point in Buddhist history, one when Hindu forms of practice were still imitated and on the cusp of the shift from Mahayana to Vajrayana (or Tantric) Buddhism.

In addition, the Mañjuśrīmūlakalpa presents a rich compendium of Buddhist life in an earlier era, containing information on a variety of its readers' concerns: astrology, astronomy, medicine and healing, ritual practice, iconography, devotion, and meditation.

What the Critics Say

Wallis provides a persuasive and insightful exploration of the conceptual underpinning of the text, and skilfully reconstructs the symbolic world it describes...Much of this is rather arcane, but Wallis does an excellent job of explaining the background of the text and the context in which it developed. This work is essential reading for anyone interested in medieval Indian Buddhist ritual practice.

"Wallis brings alive the world of the Mañjuśrīmūlakalpa﻿ ﻿﻿and its ritual practitioner, and he draws on a variety of medieval and modern sources to illuminate the text. The Mañjuśrīmūlakalpa﻿ is a crucial text for understanding medieval Indian Buddhism, yet, because of its immensity, it has been studied rather sparingly and incompletely—and never before with the particular ritual studies-cum-comparative -Indological perspective that Wallis brings to bear."   —Roger Jackson, Carlton College

Wallis has produced an extremely insightful and useful entry into this difficult and important text...He has done an admirable job in preserving the integrity of the text-of not reducing or diluting it-and he has added significantly to our understanding of late Indian Buddhism. As such, this is an invaluable book for anyone interested in Indian or Tibetan Buddhism.   —Jacob Kinnard, Iliff School of Theology